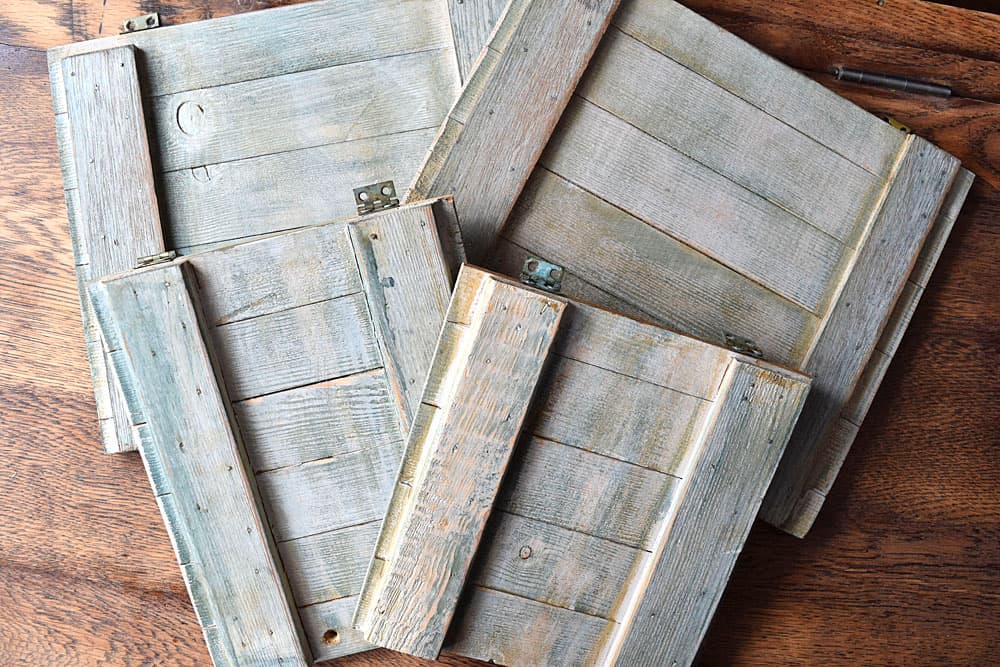 I had saved these adorable doors off of Happy Girl’s childhood kitchen cupboard when I sent it sisters way. I knew I didn’t have the space to keep the cute little cupboard, but the doors don’t take up much room, and I was sentimental about them. I knew I’d figure out some way to use them around the house.

The ladder has been looking a little empty since I took the Christmas socks off it {Here}, and I’ve wanted to incorporate more words around the house. I decided these cute little doors would hang perfectly from the rungs of my ladder.

Now…what four letter word should I use? Don’t let your mind wander here…

I thought about “Cozy” for winter, but wouldn’t want to look at that all year long. Then I remembered some chalkboard paint that I picked up that is clear; it turns any surface into a chalkboard. That would be flexible! 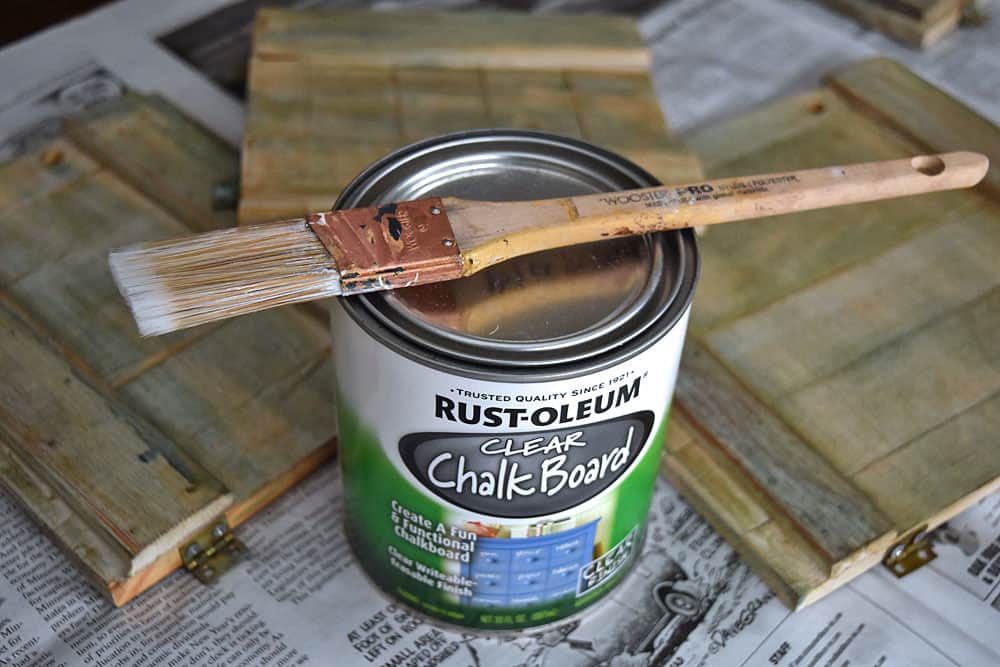 I painted a couple coats of it on one side of the doors and gave it a couple days to dry, per the instructions. So sometimes, I can chalk any four letter word I want…! But seriously, I  wanted something uplifting for my family too look at everyday.

I decided on the word “HOME” for the other side.

I got to work with my ruler, pencil, and a grocery store bag and started measuring out some letters. Nothing fancy here-this is the old fashioned way of doing things! 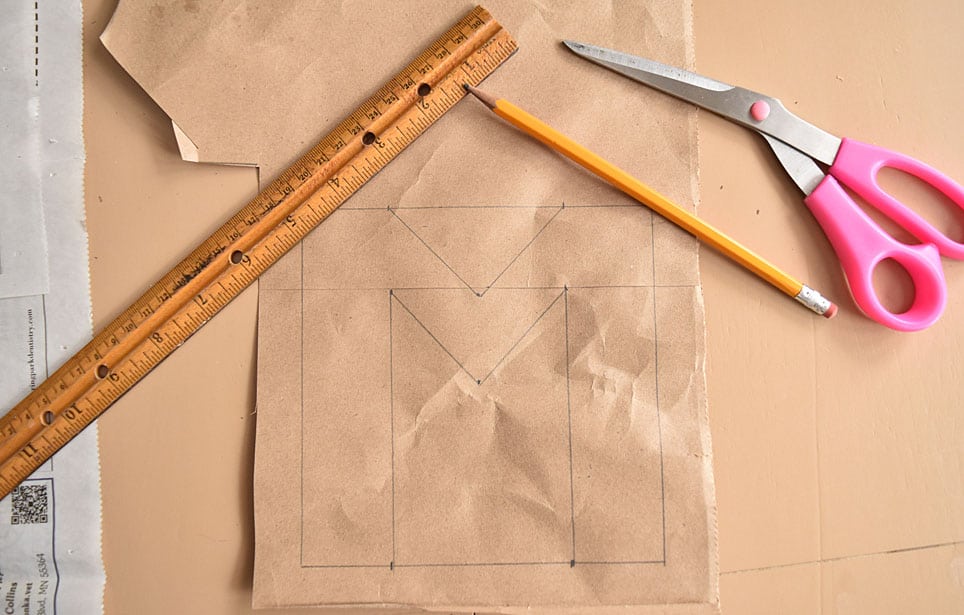 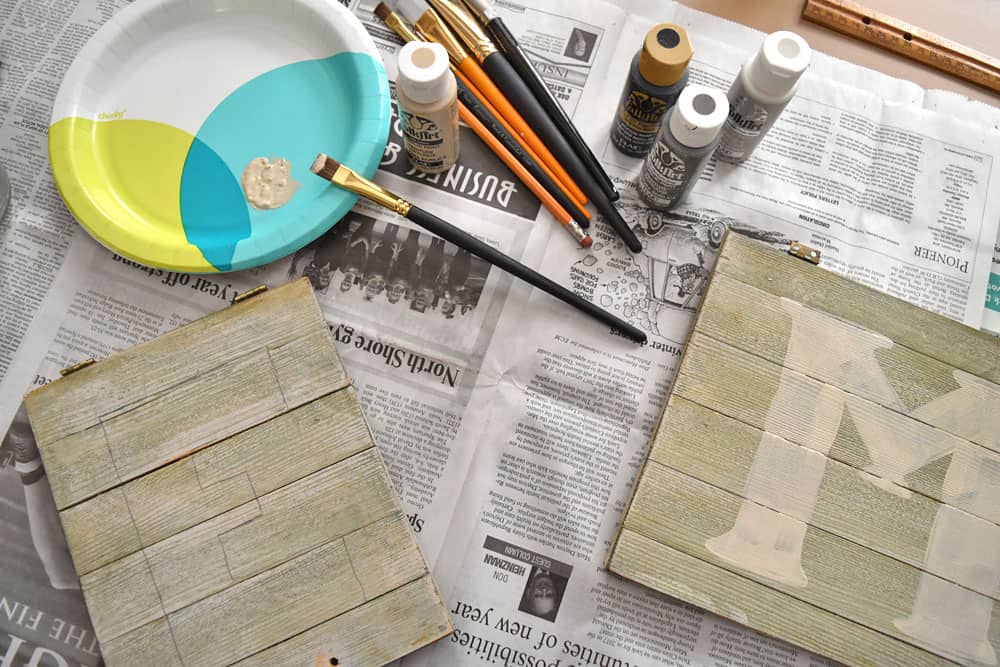 I taped the letters to the other side of the doors, traced around them and started painting some linen white acrylic paint on each. I used my square outlines, but gave each corner of the letters a little type-face flair. I decided they needed some outlining for punch. 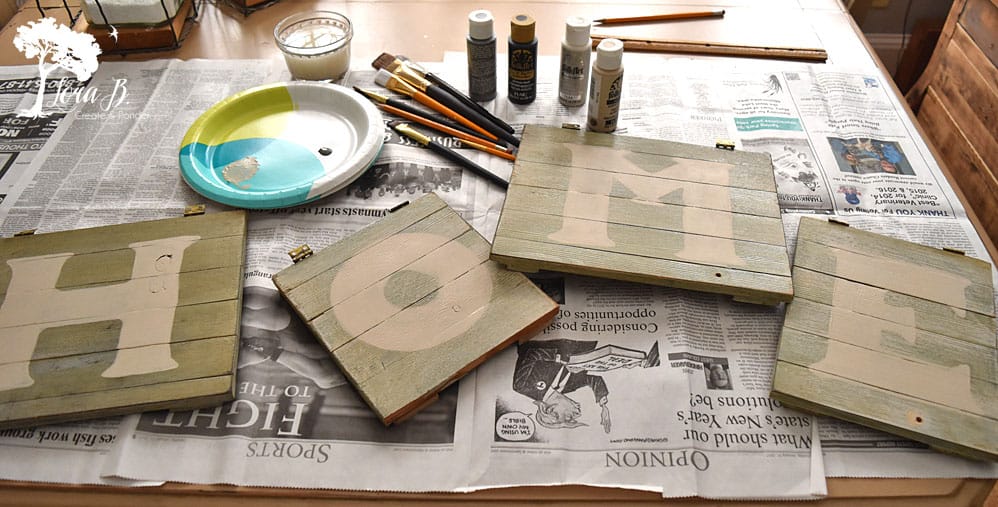 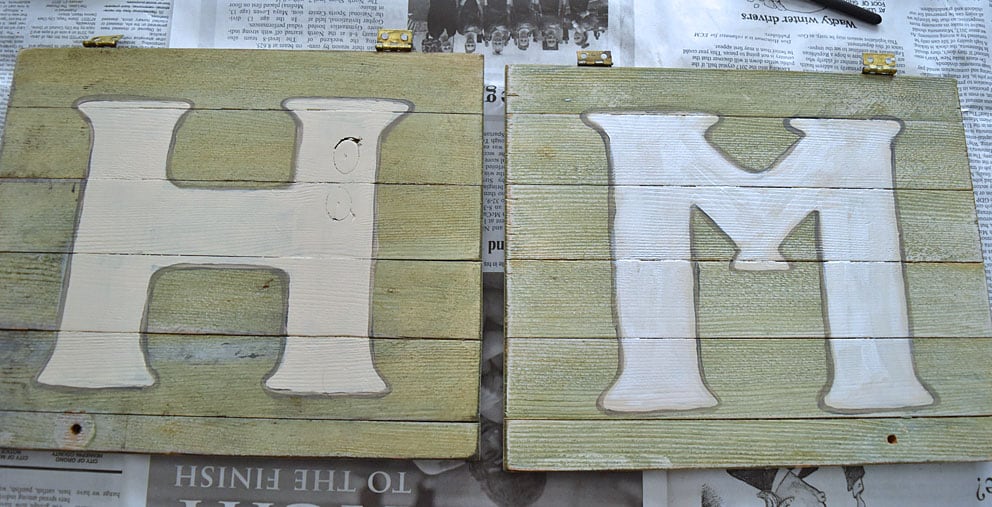 First I did a grey outline, but it seemed a little blah. The ladder is standing in kind of a shadowy corner, so I added some brown, which coordinates with my brown sofas. Now they were coming to life. I also added some glittery white paint over the linen white. The sheen is very subtle, but it gave the letters some life, and I liked how the linen white showed through the brighter white a little.

There were three holes that were left from the knobs. I decided to junk them up with some extras I had laying around:

Now for a little vintage string woven through the holes in the mini hinges, and voila’! 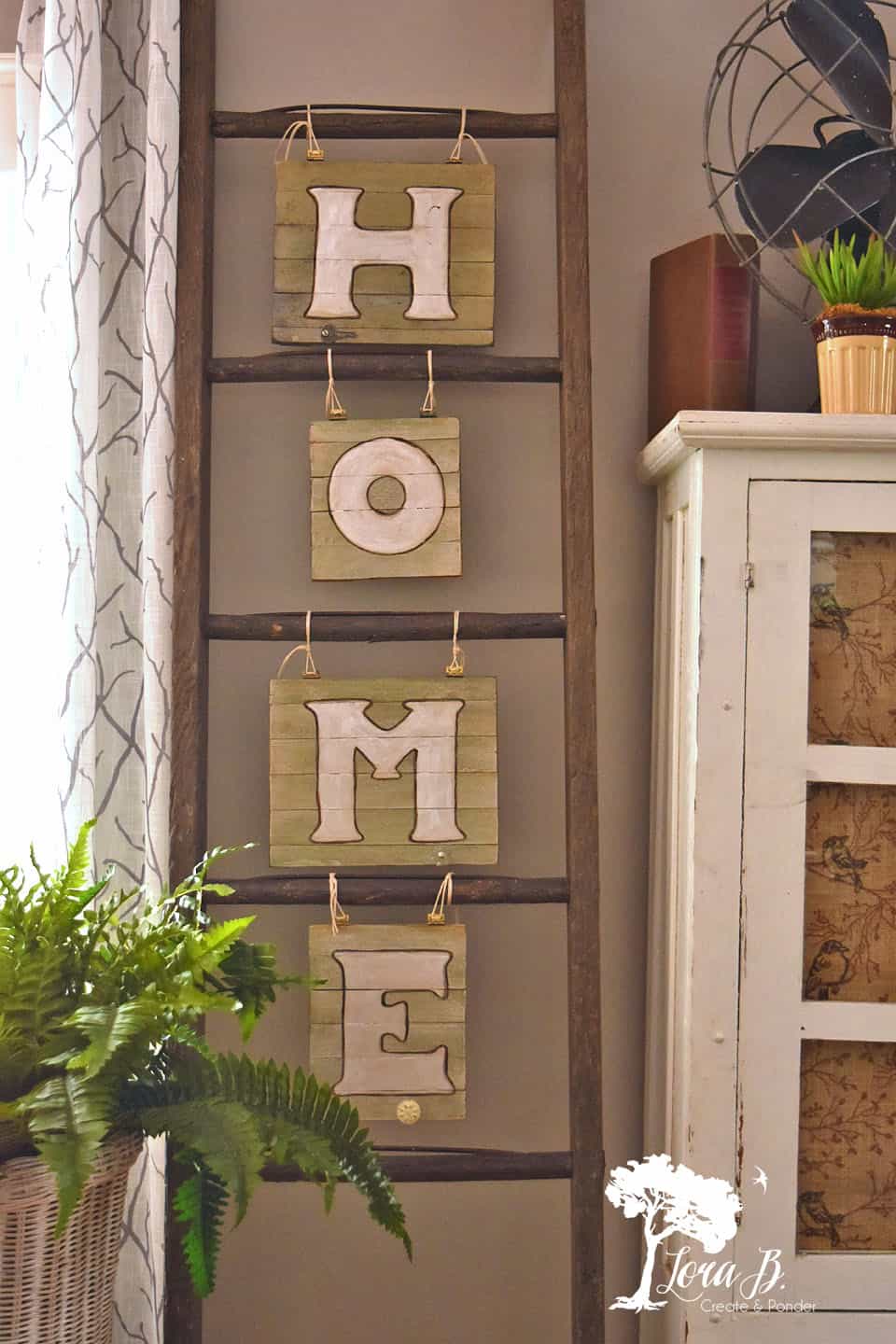 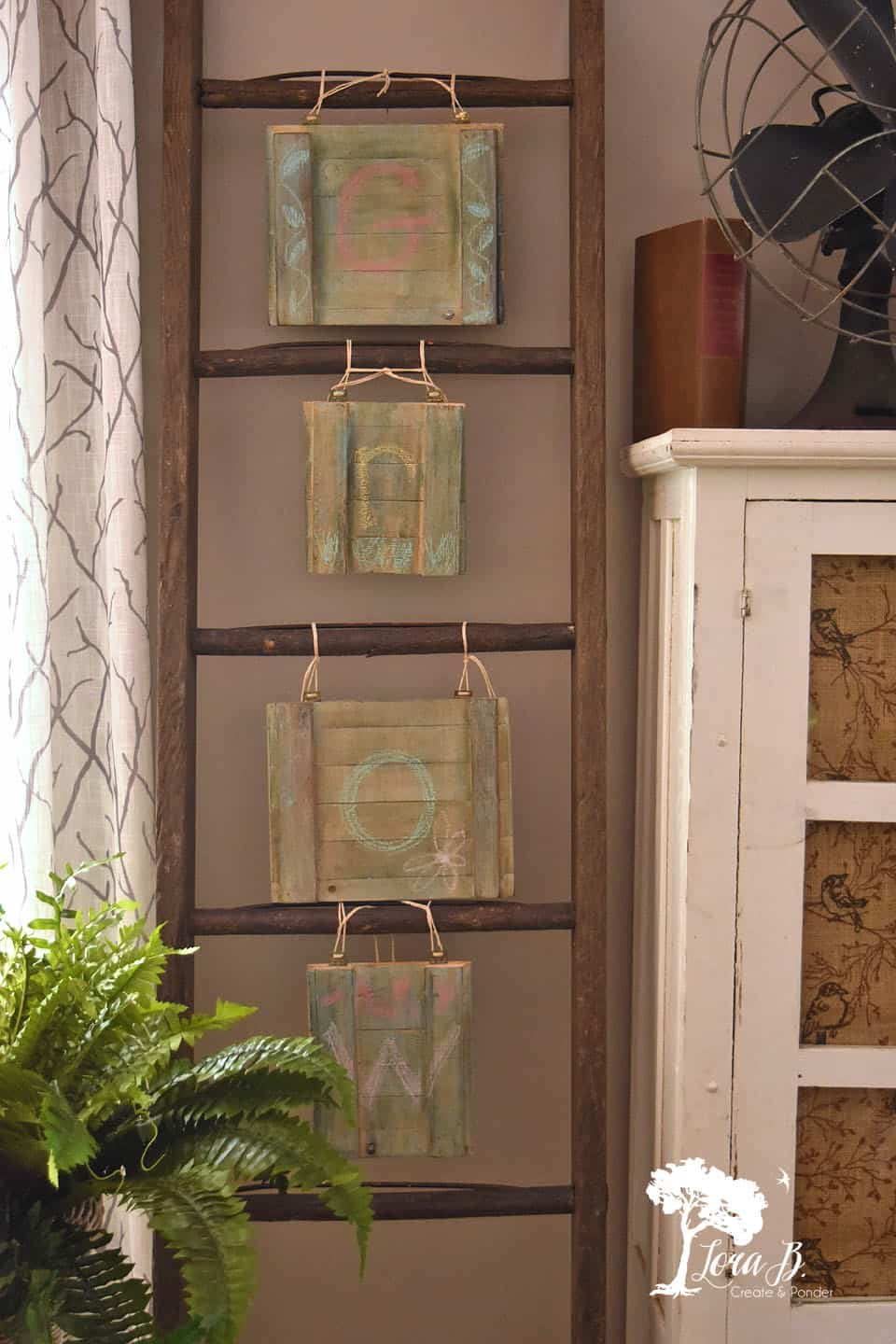 Couldn’t find any white chalk; it probably would have shown up better.

Those were the “staged” pictures. This is how the corner usually looks most days. Does everyone else have a “dog chair?” 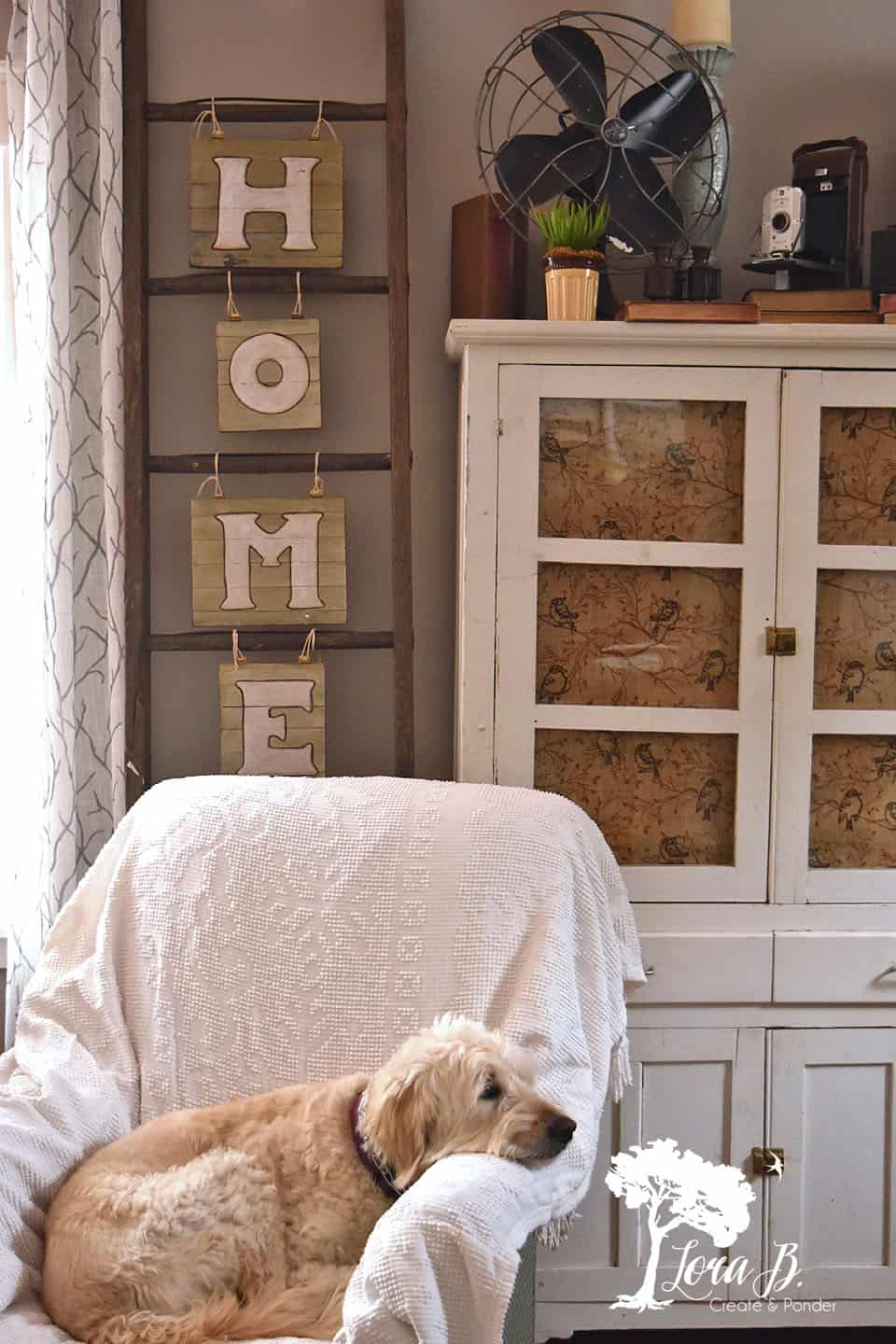 Yep, this is Daisy Doodle’s HOME. She even looked my way to say thankyou (and because I gave her a cheez-it). 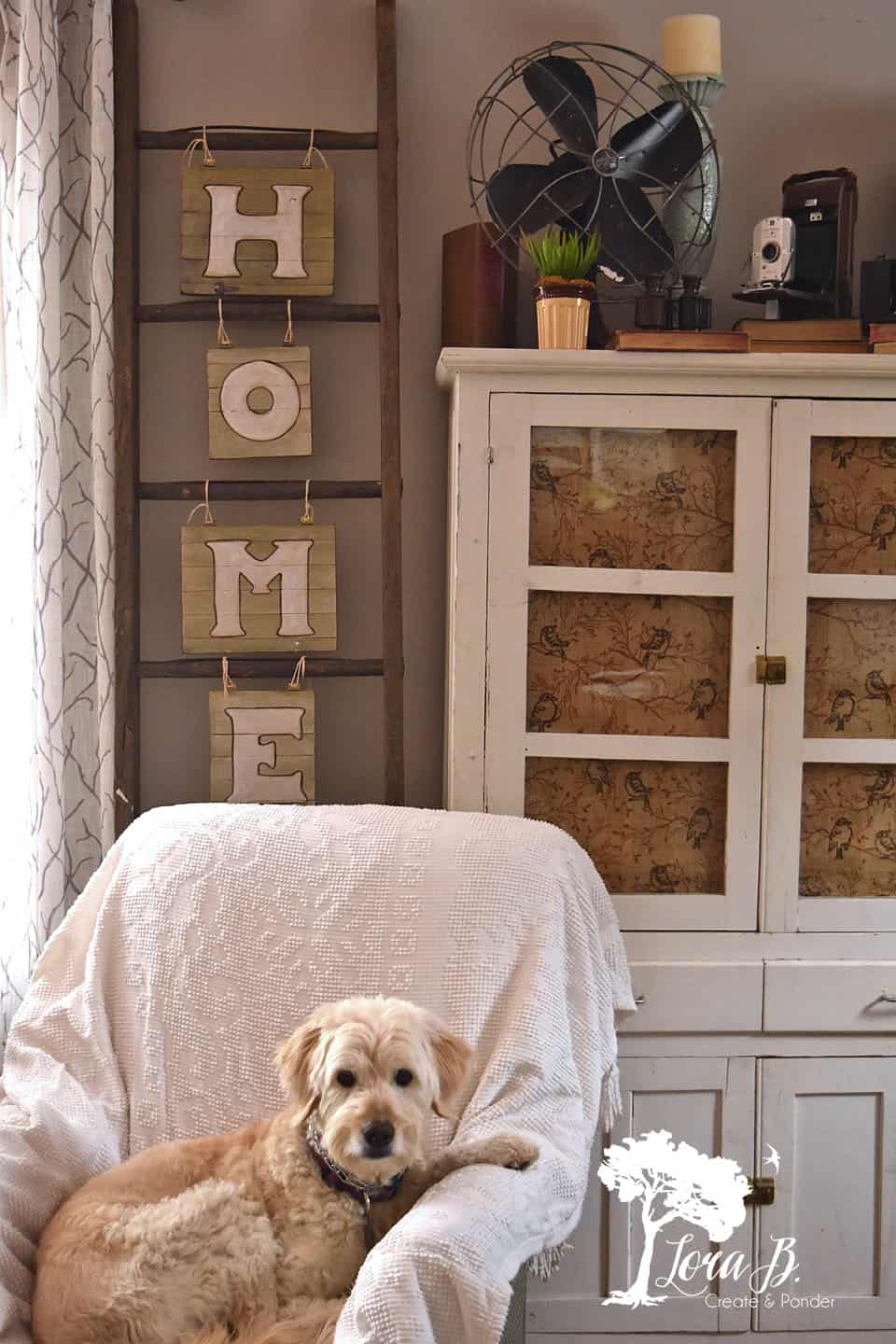 Hope you’re getting to do some creative projects at home on these winter days!

Sharing at these parties:

Have a Daily Cup of Mrs. Olson 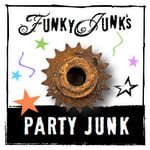 Become a Lora B Insider!

Learn to see potential so you can create the unique! As a Lora B Insider, you’ll get FREE access to all my printable resources (styling tips + seasonal art). You’ll also keep up with my creative projects in my weekly email.

One Picture, So Many Ideas… 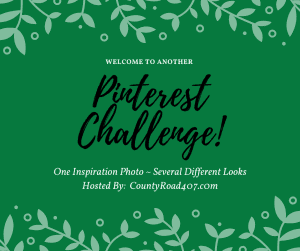 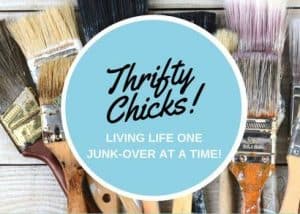 2shares
We use cookies to ensure that we give you the best experience on our website. If you continue to use this site we will assume that you are happy with it.OkPrivacy policy